Here In Our Website JABARDASTH, You can get all the details about Actor Ram Charan Teja Wiki, Age, Height, Biodata, Career, Biography, Date of Birth, Family, Son, Caste, Photos and More.Ram Charan is a Famous Telugu Actor and Dancer in the Tollywood Film industry. Ram Charan Teja Konidela is born on 27th March,1985.So According to Ram Charan Date of Birth his age is 33 Years. And He has born in Chenni, Tamil Nadu State. Ram Charan father is Chiranjeevi Konidela and Mother name is Surekha. We have already know that Megastar Chiranjeevi is Famous Telugu Actor. And Ram Charan is very active in studying and Cultural activities in his Childhood. Coming to Educational qualification,Ram Charan has completed his Schooling in Chenni.Later he compled his higher studies and B.Com Degree.
Ram Charan has very much interest in Acting from his childhood.After his education,He entered in to Cinima Feild. He has very good film background support. Ram Charan grandfather Allu Rama Lingaiah was a good actor and Best comedian in the Telugu film Industry and Ram Charan is a Nephew of Famous Telugu Actor and Producer "Nagendra Babu ( Naga Babu)", And Telugu Famous Actor and Janasena Party Chief  "Pawan Kalyan". And Ram Charan is the Cousin of Famous Telugu Actors "Stylish Star Allu Arun", "Varun Tej", And "Sai Dharam Tej".He is a Nephew of famous Telugu Film producer "Allu Aravind". 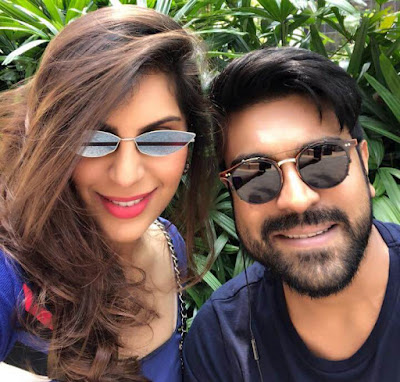 Coming to Career of Actor Ram Charan, He has been introduced with the film "Chirutha".It has been released in the Year of 2007 by the Famous Telugu Director Puri Jagannadh.This is the first film of Ram Charan and It has got good collections in Tollywood and Completed 100 days in the Telugu States.He started his Journey as Actor in Telugu Film industry.Present he is doing very good films. Actor Ram Charan is Also a producer in Tollywood. He produced Hero Chiranjeevi Film " Khadi No 150" directed by V.V Vinayak and Present he is producing Chiranjeevi Upcoming Movie "Sye Raa Narsimha Reddy" directed by Director Surender Reddy.And His New Movie Vinaya Vidheya Rama Movie is going to release 2019th of Sankranthi Festival.
Actor Ram Charan wife name is Upasana Kamineni.Marrieid on June 14th, 2012. Upasana Kamineni is working as Vice-Chairman of Apollo Hospitals and She is Grandaughter of Prathap C. Reddy.