Here you can get full details about Actor Rahul Ramakrishna Age, Height, Caste, Wiki, Girl Friend, Family, Biography, Wife, Family, Movies List and Biodata in our website jabardash.Rahul Ramakrishna is a Telugu Famous actor.He is born in middle class family in Hyderabad city on 01 February, 1991,in Himayat Nagar,Hyderabad.His father and mother and his total family is living in Hyderabad.According to his Date of birth mentioned in his social media his age is 27 year.He has done his BTech in the Vigyan Jyothi Engineering college.Asif Nagar,Hyderabad.Then after He completed his journalism course.He worked for Metro India news paper as a Journalist in 2014 year.
Rahul Ramakrishna did Sainma Shortfilm in the year of 2014.Because of his interest he came to film industry.He acted in the ETV Abhiruchi for the Cooking videos for the first time.He is a best Lyric writer also.He wrote songs for the movie "PelliChupulu".
Rahul Ramakrishna first film is Jayammu Nichayammura as a Yadagiri in the year of 2016.But in the year of 2017,The film "Arjun Reddy" made him famous Hero friend's Charector.He got several Awards for the role Shiva in the film Arjun Reddy.And in the same year 2017 he acted as a Ramana in Bharat ane Nenu Movie.Again in the year of 2018 he got a chance to act with Vijay Devarakond's film "".
Actor Rahul Ramakrishna is Acting in other movie "Mithai" movie which will release on 22nd February 2019. 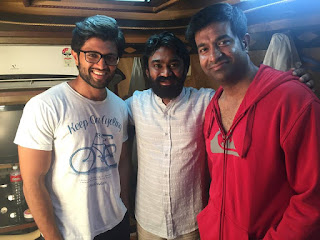